Antauri is second in command of the Hyperforce. He pilots the Brain Scrambler 2, the Super Robot's head, and his main weapons are his ghost claws. He's the black monkey for seasons one and two, in seasons three and four, he's the silver monkey.

Antauri's the wisest of the team. The rest of the team tends to look up to him and usually come to him for advice. He trained at the Veron Temple "many years ago", though specifically when it's left for the fans to speculate. Antauri is Chiro's mentor and is very caring of the rest of the team. He's a black monkey for the first two seasons, but is now the silver monkey (and fully robotic whereas his friends are only partly robotic), thanks to Skeleton King. He's commonly seen meditating and patrolling the city. He does enjoy playing chess and various other activities. He's also a vegetarian.

The story on his color change: Antauri had gone to help Chiro when he went to Skeleton King. When everyone thought hope was lost and the Dark One emerged, Antauri (who had been mortally wounded by Mandarin), gave his life by falling into the pit and using his spirit to control the Super Robot. He cut off the Dark One's head in the process of closing the crack it's escaping from. In the process of possessing Chiro. This also turns Chiro into a monkey. Chiro ran away, searching for Antauri and eventually coming across the Alchemist's lair. The silver monkey was then rebuilt by Chiro, and Antauri's spirit entered it.

Antauri isn't fond of video games (as he considers them mind-numbing and detrimental), even short circuiting Chiro's gaming systems a few times in the episode Flytor, when he deemed necessary. Despite this, he has his quirky moments such as in Big Lug. He showed interest in a cap which could hold drinks. He uses his Ghost Claws to cheat at a pinball machine, defending his actions by saying "at least I didn't tilt."

His main weapon is his Ghost Claws and the Power Primate. His training under the Veron Mystics has made him a very skilled user of the Power Primate, an example being levitating in mid-air, using attacks such as the Monkey Mind Scream, and keeping his spirit intact in the living world.

Upon using the silver monkey's body as a host, Antauri gains the ability to pass through walls. However, he retains his mastery of the Power Primate

Chiro: They share a father-son relationship and sometimes share a mentor-apprentice relationship. When Antauri dies his spirit enters Chiro's body and with Chiro's determination to get Antauri back, he leaves the hyper force to find Antauri. After his revival he says he owes Chiro his life. He's the one who teaches Chiro about the power primate.

Nova: Very close friends. She often asks his advice on a subject. He also helps keep her temper and actions in check if it gets out of hand. They share a big brother-little sister relationship most of the time and when he returned to the hyper force she embraces him in a hug. Antauri also puts her 3rd in command of the Hyperforce.

Sparx: Close friends. They tend to share different opinions, but they do respect each other. Their relationship to each other is that of an older brother-younger brother, with Sparx being carefree and laid back and Antauri being more mature and wise. All in all they will die for each other if it's called for. Furthermore, Sparx seems like a right-hand monkey to Antauri. In one episode where the team scattered in different ages, Sparx ended up as the deputy to Antauri who was the sheriff.

Gibson: Close friends. Antauri is respectful toward Gibson and vise versa. They also ask each other's advise. They see each other as equals and are on the same page in most situation and they have a deep brotherly relationship for each other.

Otto: Close friends. Otto tends to look up to Antauri, and he acts as a kind of big brother figure to Otto. He also finds him funny as does the rest of the crew.

Jinmay: Friends. She respects him, he respects her. Antauri's also the one seen to help Chiro rescue her the most often. He also pointed out she was able to call to Chiro when he transformed into a Wraith and have him free himself with the Power Primate. 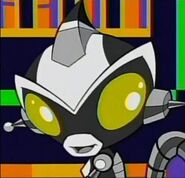 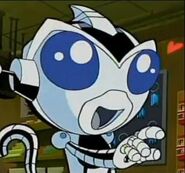 Add a photo to this gallery
Retrieved from "https://srmthfg.fandom.com/wiki/Antauri?oldid=10763"
Community content is available under CC-BY-SA unless otherwise noted.