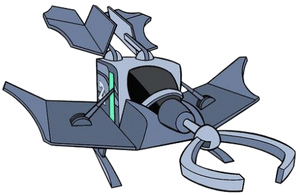 The Brain Scrambler is an airborne craft and the transformed head of the Super Robot. It's piloted by Antauri.

When the Robot splits into vehicle mode, the Brain Scrambler is the second-to-last part of the Robot to disengage. Outside, the craft's spearheaded by two large prongs that jut out from the front. There are two landing pads on the bottom of the craft, and a place where the Super Robot's eyes are on the craft's underside. Inside, the craft is silver and black, to match Antauri's coloring. When piloting, Antauri balances on two control sticks which he controls with his feet, two more which he controls with his hands, and he remains connected to the craft itself via the data port in the back of his head. There are multiple screens, dials, and switches as well.

The Brain Scrambler can shoot lasers from the prongs that jut out from the front of the craft. While in Machinder Mode, the head of the Super Robot bears the face and can shoot blue lasers from its eyes.

Retrieved from "https://srmthfg.fandom.com/wiki/Brain_Scrambler_2?oldid=10482"
Community content is available under CC-BY-SA unless otherwise noted.