Brothers in Arms is the 33rd episode of the series.

Still on their journey, Gibson's lecture on wormholes is interrupted, when an alien robot mech unexpectedly attacks the Super Robot. The Monkey Team fights back, only to lose Gibson during the battle. Stranded on a strange world, the blue monkey finds that he is not alone - also stranded is a member of the team whose mech attacked them. At first it seems the two will never get along, but when a new enemy arises, they must work together to save their teams - and themselves. 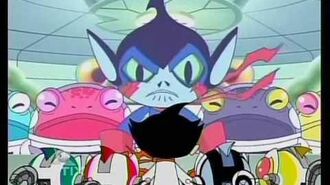 Retrieved from "https://srmthfg.fandom.com/wiki/Brothers_in_Arms?oldid=10994"
Community content is available under CC-BY-SA unless otherwise noted.