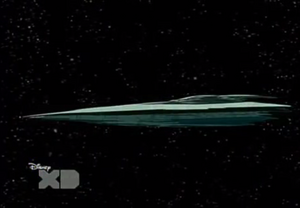 The Citadel of Bone is the Skeleton King's main ship where he hides out. His pit of ooze is in the ship used to create his Formless army to attack Shuggazoom. The Citadel of Bone is a giant spaceship made entirely out of bone, and in the episode Skeleton King, the Skeleton King seems to be somehow linked to the ship; because when the ship is attacked, the Skeleton King would feel incredible pain, which Chiro and the monkey team used to their advantage when attacking the ship. The ship also has the power to regenerate when it's destroyed. When it was destroyed in an asteroid belt, it slowly started piecing itself back together. The Citadel is also used to pierce the heart of Shuggazoom and free the Dark One Worm. As a nod to Star Wars, the ship looks like a Star Destroyer.

Retrieved from "https://srmthfg.fandom.com/wiki/Citadel_of_Bone?oldid=10509"
Community content is available under CC-BY-SA unless otherwise noted.