Galactic Smash: Space Attack is the 40th episode of the series and the first episode of season 4.

The Monkey Team is recruited to play in the world's most dangerous game: Galactic Smash, by an unknown female warrior who requires their assistance, and a cheat device has claimed that they are the only ones who can save the world.

While using a cloaking devise, Otto changed Chiro into Pitfall Harry from the Pitfall series, Link from The Legend of Zelda series and Donkey Kong. 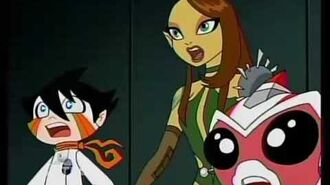 Retrieved from "https://srmthfg.fandom.com/wiki/Galactic_Smash:_Space_Attack?oldid=11008"
Community content is available under CC-BY-SA unless otherwise noted.