Hal Gibson is the team's scientist and genius. He pilots the Fist Rocket 4, or the Super Robot's left hand. He prefers to spend his days in his lab, pondering the mysteries of the universe or studying whatever strange specimen he could find. Yet, he's also a formidable fighter, his weapons being Cyber Back Drills on both of his hands.

Gibson is very proper, and speaks with a touch of a British accent. He prides himself on his high IQ, and becomes easily frustrated when faced with beings of lesser intelligence, particularly when dealing with Sparx or Otto. He's a tad arrogant, and hates to admit whenever he's wrong. Yet, he's also fiercely loyal to his friends on the Monkey Team.

Main weapons are his drills build in his fists. They can be used for drilling, or shoot energy beams.

Chiro: Of all the monkeys, Gibson and Chiro seem to have the least deep relationship (or the least observed in the series). Often, Chiro goes out of his way to avoid Gibson's lectures, making it seem like Chiro views him more of a teacher or a tutor than a close friend. However, Gibson comforted Chiro after the battle with the Sun Riders, saying it was what they stood for that made Chiro want to be a hero. He's also partnered with Chiro when they had to save their friends from Skeleton King. In one memorable moment, they stumble across a room in the Citadel of Bone filled with things from Chiro's childhood. When Gibson asks, Chiro grimly replies it was from a long time ago, meaning Gibson may be the only monkey who has caught this glimpse into Chiro's past.

Antauri: Antauri and Gibson have a close, brotherly relationship, considering Gibson views Antauri as the smartest (after himself) monkey on the team. They often play virtual chess together, and ask advice on different subjects. They work well together, and clearly respect one another.

Nova: While Nova and Gibson do not spend a lot of time together, it's clear that Nova doesn't understand a majority of Gibson's scientific language, they still harbor a great respect for one another. Nova is always ready to comfort or assist when she's needed. Notable examples include, Gibson's depression after Protesis' betrayal, and the hug Nova gives him after Gibson faced his hatred and ate the Vreen's ancestor bug.

Sparx: Gibson and Sparx are almost like brothers, constantly bickering over the slightest of details. Sparx sees Gibson as unnecessarily intelligent, calling him "Brainstrain," whereas Gibson bemoans Sparx's lack of intelligence and planning. However, when worse comes to worst, they always have each other's backs, and stick up for one another.

Otto: While Gibson may spend much of his time questioning Otto's intelligence, he respects the green monkey's mechanical mind, accepting that it may be superior to his own. In general, Gibson treats Otto like a younger brother, and the two are as close as. In Galactic Smash: Game Over, when the monkey team's trapped in the maze, Otto finds the team, he and Gibson hug - he says, "I thought I lost you." The two looked into each others' eyes for a moment, before being interrupted by more urgent matters.

Jinmay: Jinmay and Gibson rarely spend any time together on screen. However, when they do it is clear that Jinmay respects Gibson's intelligence and Gibson respects her initiative and drive. 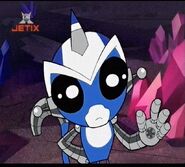 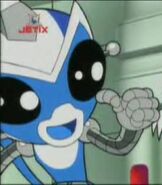 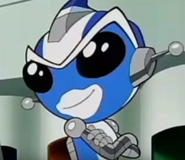 Add a photo to this gallery
Retrieved from "https://srmthfg.fandom.com/wiki/Gibson?oldid=10814"
Community content is available under CC-BY-SA unless otherwise noted.