I, Chiro is the 26th episode of the series, and the final episode of season 2.

The Power Primate's gone and the Dark Ones will soon wreak havoc upon Shuggazoom. All seems lost. But with one last hope, Chiro will have to do the unimaginable to save Shuggazoom, as the team fell, except Chiro and Antauri. As they battle the Skeleton King and defeating them, Antauri is seriously damaged and wounded by Mandarin, but Chiro defeats him, but, as Skeleton King was reviving, Antauri sacrifices himself to save Chiro, as he gets destroyed, the spirit of Antauri gets into Chiro's body, turning his attitude to a monkey, and nearly stopping the reviving Skeleton King. As the team are back again, they decided to find Chiro, going into an unknown region.

The title is a reference to Issac Ashimov's novel I, Robot. 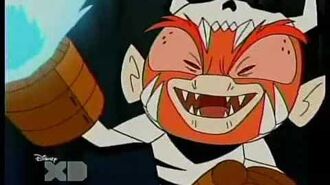 Retrieved from "https://srmthfg.fandom.com/wiki/I,_Chiro?oldid=11049"
Community content is available under CC-BY-SA unless otherwise noted.