Monster Battle Club Now! is the 34th episode of the series.

Despite his already impressive combat prowess, it wouldn't hurt if Chiro learned some new moves. So the team heads to a distant planet to visit Nova's former master, only to find it corrupted by the Skeleton King Worm. Luckily, they're able to find Master Offay, who agrees to train Chiro. The leader of the Hyperforce is soon ready to compete in the tournament that will decide the team's freedom, all the while affected by the planet's corrupted atmosphere. But while searching for a way out, Sparx, Gibson, and Otto make a startling discovery about Nova's former master. 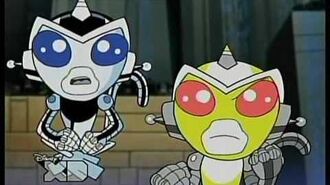 Retrieved from "https://srmthfg.fandom.com/wiki/Monster_Battle_Club_Now!?oldid=10954"
Community content is available under CC-BY-SA unless otherwise noted.