Nova is one of the only female members of the Hyperforce, with the other being Jinmay (who later becomes an honorary member). She's the best hand to hand fighter on the team and third in command of the Hyperforce. She pilots the Foot Crusher Cruiser 6, or the Super Robot's right foot, and her main weapons are her Robo-Fists. She's a very likeable character and loves stuffed animals but keeps it private. She's in love with Sparx but keeps it a secret until the last episode when she finally admits it. She has a short temper, she hates the cold thanks to Mandarin, and will get so mad she might start a fire. Her name comes from the astronomy term Nova which is when a white dwarf star explodes and give off a tremendous amount of heat.

She has a temper that she tries to control, as seen in Snowbound. Her name comes from the astronomy term Nova which is when a white dwarf star explodes and give off a tremendous amount of heat.

She's also known to love Sparx. She reveals it in Soul of Evil by saying out loud: "Fight it Sparx. I love you too much to lose you," kissing him on the cheek after he escaped his corruption caused by the Fire of Hate. Though there have been some signs in the episodes before that one. In Ghosts of Shuggazoom, when the team is standing on the Super Robot and looking down on the citizens, she's standing next to Sparx.

Nova's fear is not being able face the things and people coming her way. She also has a soft spot for stuffed animals, but doesn't seem to want anyone on the team to know. Otto has shown signs of liking Nova in The Savage Lands Part 1, as well as others, though doesn't seem to pursue it too far.

After the episode Belly of the Beast, Nova has shown a gentler side of herself, but is usually tough when in a fight, of which is probably a lot of the time.

Before Chiro became leader of the team and Mandarin was still on it Nova had a bad experience in the training room. Nova was freezing cold because Mandarin was teaching her on how to brave the elements. The more that Nova just stood there, the colder Mandarin made it Until suddenly Nova's body had so much heat emanating from it, that she nearly blew the walls off the training room and damaged Mandarin. Ever since then she tried to control her temper because she's scared that she might hurt the people that she cares about.

Her main weapon is her robotic fists. Her weapons combined with her fighting techniques make her a very formidable opponent in combat, and her strength's capable enough to create tidal waves and cause small earthquakes. When extremely agitated, she can release her anger in the form of a supernova, damaging and burning anything in her path.

Antauri: Close Friend. Antauri and Nova are often seen as opposites, yet agree on many things. He also tends to help keep Nova in check when her temper or antics get out of hand. They respect each other though. They have an older brother and younger sister relationship.

Sparx: Close friend whom she's in love with and boyfriend by the end. Nova has a complex love-hate relationship with Sparx. She becomes annoyed by Sparx' goofy behaviour and constant flirting, usually resulting in her punching and slapping him when angry enough. However, she clearly cares a lot about him and they're very close, usually teasing each other. She also shows signs of jealousy whenever Sparx flirts with other women. In Soul of Evil, Sparx turned evil by the Fire of Hate, which makes Nova extremely sad. She refuses to fight him and tries to reasoning with him, resulting in her being taken as his hostage and being tortured by him. Then Nova begins to cry and begs him to return to normal, finally admitting her love for him. Thanks to her love confession and their friends' help, Sparx returns to normal. Nova's overjoyed and kisses him on the cheek.

Otto: Close Friend. A kind of brother-sister bond shown throughout the show.

Jinmay: Close Friend. They seem to share a sisterly bond at times.

The Alchemist: Nova apparently was very close to her creator the Alchemist. 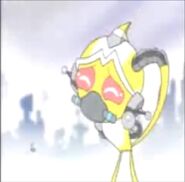 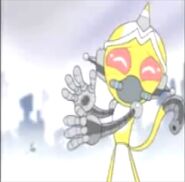 Add a photo to this gallery
Retrieved from "https://srmthfg.fandom.com/wiki/Nova?oldid=10803"
Community content is available under CC-BY-SA unless otherwise noted.