Otto is the team's mechanical genius. He pilots the Foot Crusher Cruiser 5, or the Super Robot's left foot, and his main weapons are green energy saws. Some people say that he might have a crush on Nova and might be jealous of Sparx.

He's the comedian of the team, often jumping into serious situations with a funny observation or comment. Typically, he doesn't try becoming funny. Naivety's in his nature. He's easily distracted, very creative, and an absolutely brilliant mechanic. The show reveals very little about Otto's background other than a reference that he's very close with Mandarin, before he went evil. Otto's constantly experimenting with new gadgets, even if some of them don't quite work out the way he planned. He's incredibly optimistic, and is rarely provoked to true anger. He's also fiercely loyal to his friends on the team, and would do anything for them. Inside the Super Robot, Otto's commonly seen making a new invention, playing video games with Chiro, or working with Gibson. He's serious at times, but is mostly very child-like. He's easily excited as seen in the episode Big Lug where he gets very excited about snacks.

Main weapons are his energy saws, one in each hand. However, he's shown have different forms of weapons, probably as a result of his mechanical prowess.

Chiro: Close Friends. Both have an interest in mechanical engineering.

Antauri: Close friends. Antauri acts as a big brother figure to Otto. He also finds him funny as does the rest of the crew.

Gibson: While Gibson may spend much of his time questioning Otto's intelligence, he respects the green monkey's mechanical mind, accepting that it's superior to his own at times. He treats Otto like a younger brother. Many fans ship them as "Gibotto."

Nova: Close Friend. They have a sibling-type of bond. There have been moments in the series where Otto shows indications of having a crush on Nova. In the episode, The Savage Lands Part 1, Nova compliments Otto by saying, "You're the best Otto," to which, Otto shrugs and said "Nah...you're the best." Afterwards Otto stares and grins at Nova while she walks away until he notices Gibson and Sparx glaring at him. However, it's never confirmed if Otto had a crush on Nova and even if there was one, it would have been one-sided.

Sparx: Sparx and Otto share a close and great relationship. Often taking time out of more important duties, to hang out and play video games or goof off, often getting into trouble together. Occasionally, they drag Chiro, or even Gibson into their schemes. There's a possibility that Otto was jealous of Sparx because of him having a possible crush on Nova and that Nova admitted to liking Sparx. However, Otto's crush on Nova was never confirmed, so it's not certain if he was ever jealous of Sparx.

Jinmay: Friends: they aren't shown together much on-screen. 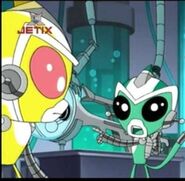 Add a photo to this gallery
Retrieved from "https://srmthfg.fandom.com/wiki/Otto?oldid=11038"
Community content is available under CC-BY-SA unless otherwise noted.