The Skeleton King is the main antagonist of the series and the Hyperforce's sworn enemy. His servants include the Formless.

The Skeleton King was originally a kind and humble Alchemist. Who lived in the region later known as The Zone of Wasted Years. He's a very important individual as he's the creator of the Monkey Team. He sought to help the world with his knowledge on science and magic. During the old days, he created weapons as well as working on the Silver Monkey to assist his best friend, Captain Shuggazoom. He requested the Alchemist to make a substitute heroic force, which became known as the Hyperforce. At one stage, the Alchemist was studying the Netherworld, which contained a group of evil beings termed by the Verron Mystics as the Dark Ones. Captain Shuggazoom was at first worried that these evil creatures would breach the barrier the Alchemist created, but he assured him that they were all safe. Unfortunately, Mandarin accidentally caused a breach to occur by jumping on the main console, releasing two of the creatures into the world: a demon-like being who subdued the Alchemist, and a worm that would eventually become Dark One Worm.

After the Alchemist's soul tainted with evil, he became the Skeleton King. His body turned half skeletal and half machine. The Skeleton King has sworn to destroy Shuggazoom City along with the Hyperforce. He mostly uses Formless to attack, but often creates new creatures to lay waste on the city. As the series advances, Skeleton King broadens his means of attack, going as far as to pursue the Hyperforce at a psychological level. Such as in the episode, In the Grip of Evil, where he attacks all of them in a dream. In Soul of Evil, Skeleton King was resurrected by Valeena, Mandarin, and a corrupted Sparx, creates a new castle and army and prepares to lead them in an assault on Shuggazoom in the finale.

The Skeleton King infects the world

The Skeleton King breaks off 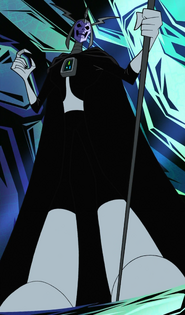 Add a photo to this gallery
Retrieved from "https://srmthfg.fandom.com/wiki/Skeleton_King?oldid=10806"
Community content is available under CC-BY-SA unless otherwise noted.