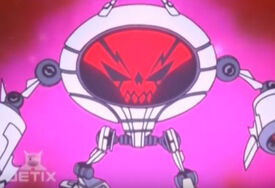 All of its attacks become upgraded, and it became undefeatable. It can take out lasers from every part of itself, transform into a ball, and fly at incredible speeds

At the end of Season 3, it's destroyed by the Super Robot. Mandarin recovered it, and now uses it as a ship.

Retrieved from "https://srmthfg.fandom.com/wiki/TV_Monster?oldid=9449"
Community content is available under CC-BY-SA unless otherwise noted.