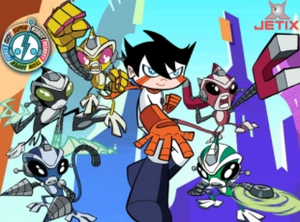 The series is set on Shuggazoom, a small planet, which has only one city, Shuggazoom City. When Chiro was exploring the outskirts of Shuggazoom, he discovered a giant abandoned Super Robot, and then went inside. He pulled the 'on' switch, awakening the five robotic monkeys that form the Super Robot Monkey Team Hyperforce. In the process Chiro also fused himself with the Power Primate, allowing him to transform into a brave fighter and bold leader of the team, with the aid of the five Robot Monkeys: Antauri, Gibson, Sparx, Otto, and Nova. Their mission is to save the Shuggazoom City from the Skeleton King, the main antagonist in the series. By virtue of the fact that Chiro was not a superhero from birth, the five Robot Monkeys must train him, which ultimately results in him leading the team. The Robot Monkeys continue to train Chiro, as he fulfills his destiny as protector of the universe. When fighting the larger enemies, the Hyperforce uses the Super Robot, which can split into six separate vehicles. Its main attack, when combined as the whole robot, is Lazatron Fury, a powerful energy beam that is fired from its chest. The Super Robot also serves as Chiro and the monkeys' headquarters and home.

SRMTHG premiered on ABC Family's Jetix programming block on September 18, 2004. It's also shown on Jetix UK on January 1st 2005, but was taken off the air on July 22nd 2006, for unknown reasons. The series however was broadcast in the UK on GMTV's Toonattik. It also aired on Toon Disney's Jetix block until the Jetix programming block was taken off of ABC Family in August 2006, and the series began to air exclusively on Toon Disney.

The Jetix block took up total of 85% of Toon Disney's programming time. The ABC Family Jetix block's discontinued in September 2006, though Jetix continued to air on Toon Disney. Sitcom repeats currently air on ABC Family in Jetix's former timeslot from 7-9 a.m. ET. The reason for Jetix's removal from ABC Family was its expansion on Toon Disney (taking over more than half of said channel's schedule). Most of Jetix's programming was previously aired on Fox Kids and Fox Family.