The Stranded Seven is the 31st episode of the series.

Attacked by a swarm of evil giant praying mantises, the Super Robot crashes on a distant world with nowhere to go. Until the Hyperforce meets the feline inhabitants, that is. It seems the Mantidons have been plaguing them for quite some time, and some look to the team for help while others turn them away. The Monkey Team wondered if they should stay and help, wondering if it will make a difference if they do.

Once Otto used a bamboo gatling gun on Mantidons, he said: "Leave her alone you bugs!" A reference to Starship Troopers, which starred Clancy Brown. 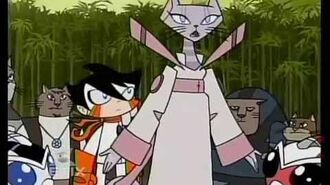 Retrieved from "https://srmthfg.fandom.com/wiki/The_Stranded_Seven?oldid=10997"
Community content is available under CC-BY-SA unless otherwise noted.