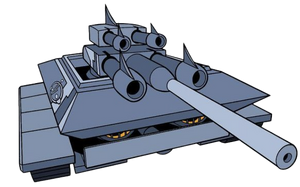 The Torso Tank is the largest and most formidable of the vehicles; it's piloted by Chiro. When in Machinder Mode, it forms the Super Robot's torso.

The Torso Tank looks much like it does as the Robot's torso - a giant steel box, the tank is a terrestrial vehicle, and topped by a powerful cannon. Inside, Chiro sits in a piloting chair with a seatbelt, and the walls of the tank are orange. He controls the tank with two joysticks. The Torso Tank possesses a holographic screen that allows Chiro to see what's happening outside the tank.

The Torso Tank makes a majority of its attacks with the cannon located on the top of the tank.

Retrieved from "https://srmthfg.fandom.com/wiki/Torso_Tank_1?oldid=11022"
Community content is available under CC-BY-SA unless otherwise noted.