Wonder Fun Meat World is the 23rd episode of the series.

When an unknown restaurant came in out of no where, the Monkey Team thought they'll might need some meat for their bellies. Chiro gasped after seeing his face has changed. Will the Hyperforce figure who made all the lies or they'll eat some more meat to get more like the people on Shuggazoom?

The episode contains plot elements from Soylent Green (including the quote "It's people! Cloggy Colon Creature is made of people!" similar to "It's people! Soylent Green is people!"), and Motel Hell, where the plot was about people who were eaten by other creatures and people. 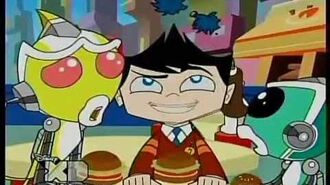 Retrieved from "https://srmthfg.fandom.com/wiki/Wonder_Fun_Meat_World?oldid=10981"
Community content is available under CC-BY-SA unless otherwise noted.